📆 Starting April 2020, the IAB Transparency and Consent Framework (TCF) will transition to its version 2. Vendors, CMPs, and publishers/advertisers will update their websites and mobile apps to support this new version of the TCF in the coming months.

📕 This article summarizes the key elements of the version 2 of the IAB TCF and the migration calendar at Didomi.

📕 In 2018, the IAB Europe and the IAB Techlab released the first version of the TCF for standardizing how consent is collected and shared across the digital advertising industry. The TCF contains a list of purposes that all members of the industry agree on, a set of policies on how valid consent is to be collected by publishers/advertisers, and a standard format for encoding the user choices (the consent string) and sharing it between members of the industry.

In less than 2 years, the TCF has become the standard for running personalized ad campaigns, measurement, attribution, etc. in compliance with the GDPR. It has been adopted by all the major players and IAB-compliant CMPs like Didomi.

Incorporating feedback from European data protection authorities, consumer groups, and the ad tech industry, the IAB Europe and the IAB TechLab developed a new iteration of the TCF to provide more choices and information to end users.

The key additional features of the IAB TCF version 2 are:

✅ Control of allowed legal basis by publishers through publisher restrictions.

✅ Improved CMP API for sharing consent between CMPs and vendors.

Read more about the benefits of the TCF 2 on the IAB Europe website.

TCF version 2 and the Didomi CMP

🔎 Supporting the TCF version 2 at Didomi will bring changes to the Didomi Console (for managing categories of purposes and v2-specific features) and the Didomi SDKs.

The images and information presented below are examples of possible configurations with the Didomi CMP. They are subject to last-minute changes.

The Didomi Console will be updated to allow you to enable the TCF version 2 in consent notices:

It will also allow managing categories of purposes ("stacks" in the TCF version 2):

Read our migration guide for the Web SDK to learn more about configuring your consent notices for the TCF version 2.

🔎 We are updating our consent notices to offer better information and choices to the user, and align with the new policies of the TCF version 2.

In notices, a complete list of purposes or categories will be displayed and kept up-to-date to ensure that the user is getting complete information at all times:

In the Preferences / Purposes section, users will now be able to give consent and exercise their right to object: 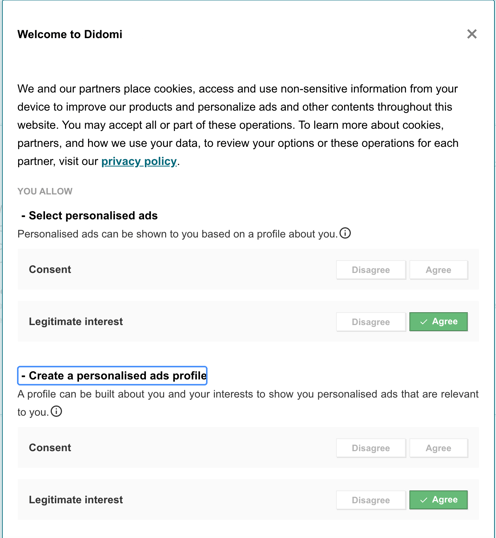 Users will be able to make similar choices for vendors, with the option to object to their data processing based on legitimate interest: 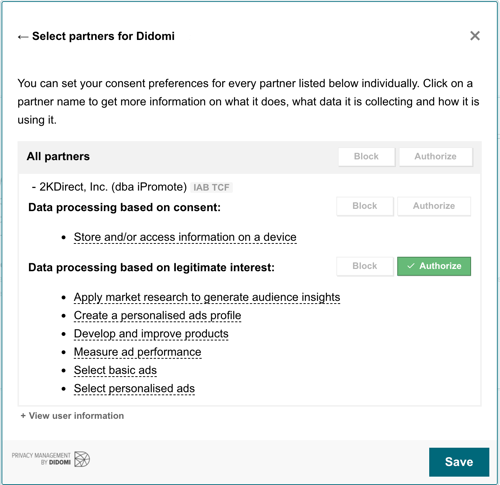 One can check the TCF version 2 vendor list from the IAB for the complete list of vendors that are registered for that version.